You can’t be bothered to put together a costume. You have things to do, people to see. Okay, you’ll put forth the bare minimum of effort. Just ears and a tail. To give the idea of a costume. As if to say, “Wouldn’t it be funny if I wore a costume? Imagine that!” It’s like impressionism––giving the impression of a costume. Or inception––implanting the idea in their minds that you could be wearing a costume.If we knew how to make a convincing zebra sound, we would. We’ll leave that to you once you’re in this Zebra Ears and Tail Kit. You really aren’t going to fool anyone unless you own black and white striped clothes because with zebras, it’s pretty much all-or-nothing as far as the stripes theme goes. But at least you’ll get credit for making an attempt at a costume, however half-hearted it may be. Or maybe you’re just a really big fan of Fruit Stripe gum! Who knows why this appeals to you. That’s what they’ll say. 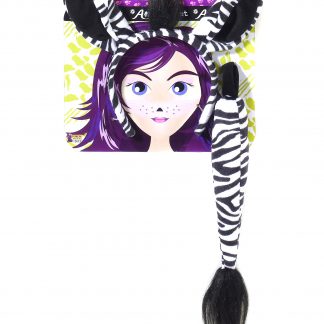