You’re a Good Man, Wolverine BrownWhat makes a good superhero? Does it mean having an unbreakable sense of morality, like Captain America? How about a knack for leadership, like Cyclops? A kind heart, like Nightcrawler? How about access to a near-limitless source of power, like Jean Grey? Sheesh, we hope not! If those are the qualities you need to be a superhero, then Wolverine doesn’t stand a chance.Ol’ Wolvie is gruff. He’s not always very nice to his teammates. He doesn’t always make the most morally sound choices and he looks like he’s been living in the woods for a decade. But you know what? Wolverine does the best that he can to do right! He might be rough around the edges, but when it comes down to it, we think he’s one of the best heroes around despite his flaws. He proves that you don’t have to be perfect to be a hero!Product DetailsNow, you can assume the role of the rough-around-the-edges member of the X-Men! With this Adult Wolverine Costume, you’ll be able to try your claws and being a hero. This officially licensed Marvel costume recreates the look of Wolverine’s gold and brown outfit from the 1980s run of the comic. The chest has a layer of muscle padding to help give you Logan’s muscular look. The red belt fits around the waist with an adjustable buckle. The boot covers are brown and fit over any pair of shoes, so you can easily wear your favorite pair of kicks while you kick it as Wolverine. Of course, you can’t be Wolverine without a set of claws and the included brown gloves come with a set of claws in each of them. The mask finishes the whole look off and comes with the pointed ears that Wolvie has become famous for!Stretch those Claws OutOnce you’re all dressed up as the X-Men’s resident bad boy, you’ll be ready to tussle with a few foes! Just remember that this costume doesn’t actually grant you any superpowers, so it might be a good idea to think twice before challenging Magneto! 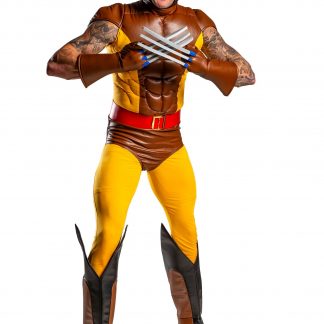