Once upon a time, in a distant land on the coast of a vast sea, there was a great King. He ruled over his mighty land of Salt and looked over his many people with grand admiration. But, they were often saddened by the commitment that the King had for them and they wept salty tears, each of them hoping that he would find happiness with a wondrous Queen.Across the vast sea was an island. This tropical place had beautiful green trees and a river of tart juice that gave bounty to the people of the Lime Isle, even if they often were forced to walk around with puckered lips caused by the sour-but-sweet taste that flooded throughout their land. The Queen of the Lime Isle looked across her land and at the sea of puckered lips and desperately wished for a new texture that might bring some form of relief to her poor subjects’ taste buds.But, the future was bright for both peoples! For, one day, the Salt King and Lime Queen would meet and, together, they would bring about the most joyous of beings: Margarita, the Tequila Princess! Your subjects have been united from two great kingdoms and look forward with rapt attention to see you appear and gift them a chance to enjoy one of your fabulous parties, especially with you in this Women’s Tequila Princess costume! The stretch knit bodice and vibrantly layered ruffle skirt gives all your people that splash of color that they long for. Long live Princess Margarita! 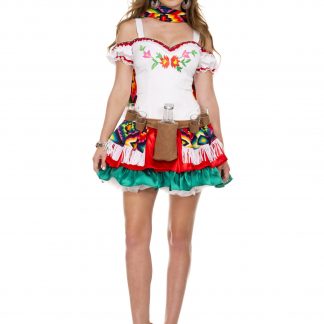