The Dark Lady The Imperial song begins its thrums. Terror is bound to spread throughout the place in no time. Everyone knows what this means. The Sith Lord is appearing. Soon, they’ll all see that dark cloak wisping around. They may even hear the horrific hiss of breathing from that dreaded mask and helmet. If they’re lucky, there won’t be any Force Choking or telekinetic blasts going on and maybe even the gleaming red lightsaber will stay in its sheath. But, here’s the thing. Who really knows who the true Lord Vador actually is? Very few know the story. Few even ever knew it. Maybe the old man Kenobi had a few details wrong. What if this whole time, we’ve been fearing a Dark Lord when the truth apprentice to the Sith Emperor is actually Lady Vader!? Okay, okay. Admittedly, “Vader” technically means “Father,” so it creates a few continuity and confusing errors if we jumble that around. But, then again, the Sith are hardly of Germanic or Dutch descent, so we’re not sure that’s as much a sticking point as it seems!Product DetailsThe point is that anyone would love to enjoy some time living out their powerful fantasies of being a leader of the Sith forces in Star Wars. So, we are happy to offer this Darth Vader costume with a feminine twist. This is an officially licensed costume that comes with a zip-up jumpsuit that features an embroidered switch box, boot covers, a belt, and an attached short cape on the back. Long gloves and the Darth Vader mask complete this iconic look. All you need are those powers, a lightsaber, and a classic scene with Luke.No, I Am Your… Mother!Everyone gets the quote wrong, anyway, so why not reinvent the whole scene when you wear this Darth Vader costume. Tell Luke of his true parentage and maybe the two of you actually could rule the galaxy together! 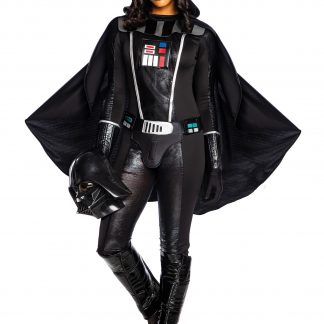