When America’s men were off to fight “over there” the nation called on the women to put their hands to use. This gave women a taste of what it was like to have a major part of the workforce. It was a time of pride in the women’s strength and smarts. It not only affected people’s mindsets but it changed unpredictable things like the fashions. Instead of long, loose hair and complicated updo’s woman started tying back their hair with a kerchief. It was only a short time after women were arrested if they wanted to wear trousers and now they were in factories wearing jumpsuits. So, when posters of Rosie the Riveter started popping up around the country it was a pretty revolutionary image, sponsored by the government, no less! It was the inspiration women needed to continue working hard in victory gardens, munitions factories, and salvage programming. The times might have been hard but everyone was coming together, putting aside class, to make sure their country stayed together in a time of violence and hardship. This costume includes a jumpsuit and a bandana. The jumpsuit has a collar with short sleeves and a zipper. The jumpsuit also has pockets, belt loops, and cuffed pants. The patch on the collar has the famous and inspiring tagline “We can do it”. Pair this with a pair of sensible boots so you’ll be ready for whatever the factories throw at you. Tie the included bandana around your head and you’ll be an inspiration to the movement! 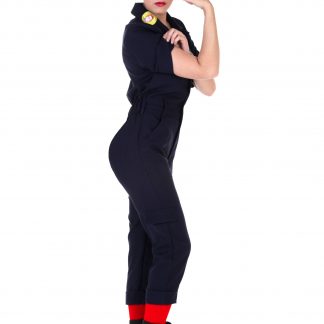