You had some crazy aspirations as a kid. There was so much that you wanted to accomplish and so many things that you wanted to become. Of course, one special thing probably stands out. You could have been a ninja. You could have been a sneaky assassin. You could have been spending your days stalking dangerous enemies in the shadows with your kunai in hand. Of course, you grew up and realized that ninja just wasn’t a viable career path, so you had to shelve the dreams of working as a shinobi to satisfy social norms. But what if you could have one more chance at living the dream of being a true ninja warrior? What if you had another chance to bust out your katana for one final hurrah? Well, we’re here to give you that chance with this Ninja Assassin Costume for women!This exclusive women’s ninja costume comes with a fierce and dark look that tells your enemies that you are one with the shadows! With a form fitting shirt and faux leather armor for the chest and arms, you’ll look ready to take down a whole platoon of samurai in a single swing of your ninjato (sold separately)! Since the entire costume is a jet black color, you’ll blend perfectly into dark corners and nooks, so you should have no problem using your mastery of stealth to dominate the competition. Make sure you train with some of our ninja weapons before heading out though! 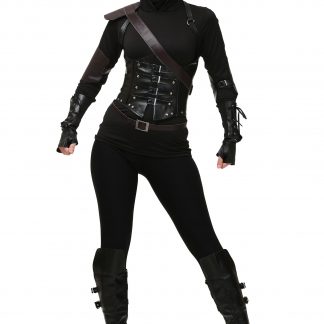