There are a lot of different preconceptions about vampires: some of which are true, some false, and some are simply wildly overexaggerated. Take the idea that vampires can’t stand garlic for example. Yes, vampires tend to avoid this pungent seasoning but that’s simply because of their heightened senses. While they might not hang out in Italian restaurants very often, that garlic bread you ate last night won’t keep you safe if you’re strolling through a vamp’s territory on a moonlit night. Another falsity? That rumor about vampires not showing up in mirrors. It was most likely started by a descendant of Dracula to put their potential victims at ease. If we had simply used our common sense we wouldn’t have believed that rumor for an instant. How would the vainest monsters of them all survive without access to a reflection of themselves? How would they figure out what pair of sunglasses is going to look chic when walking into that secret underground dance club? One rumor that’s true? Vampires always look sophisticated. Who else can get away with that upturned collar look? So, whether you’re a true life vampire trying to return to your red velvet roots or you’re simply curious about the night dweller life style, you’ll look the part in this stunning ensemble. In gorgeous shades of black and red, this ensemble features an intricately textured coat with tails and a dramatic high collar. With the ruffled dickey, you’ll find yourself right at home in that creepy castle lair. Paired with any of our luxurious fashionable vampire accessories you’ll be ready to debunk some of those nasty vampire rumors, there’s no way a vamp this dashing is going to turn into a bat! 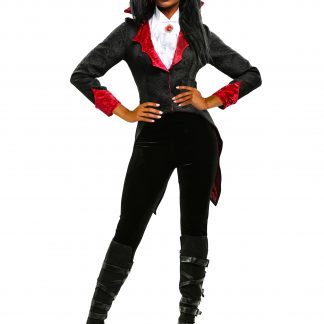