Cleopatra? She was not one to trifle with.Not only did she rule Egypt as Pharaoh (by herself), she bore sons to Julius Caesar and Marc Antony (four of them), descended from the Ptolemaic dynasty (thanks to Alexander the Great), and she called herself the re-incarnation of Isis (the Egyptian goddess of marriage and wisdom). Ok, so maybe she wasn’t great at the whole marriage part, but it’s clear: she was a powerhouse. She went down in history for tangoing with the Roman Empire and its rulers. Yes, it may have culminated in a tragic and dramatic suicide, but still! Everyone knows her name.Which makes perfect sense why one might want to dress up as this femme fatale. Sultry. Dangerous. Authoritative. Did we mention Egyptian? Because that means you know she was decked to the nines in gold jewelry and silky fabrics. That’s right. Gorgeous.Our Black and Teal Cleopatra costume will do the memory of this woman justice. With long dress and a gold colored dress yoke, this outfit has a rich teal and gold leopard-print pattern over the top and collar. There’s a gold organza scarf attached to gold cuffs to elegantly swoop behind you and headband with beads. Feeling like an Egyptian Goddess yet? Because you look like one. 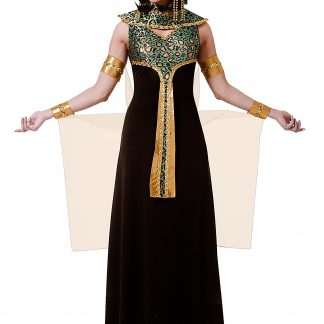