Kids and CourageLife as a little kid is scary. It’s hard for a toddler to understand what’s happening around them! Adults say strange things like, “break a leg” and “skeletons in the closet” with a smile on their faces while they think that something’s gone seriously wrong! Kids have to deal with so much. There are dark rooms and spooky stairs where monsters could be waiting. There are strange gloopy vegetables waiting on their plates. They can be frightened by understandable things such as a thunderstorm or a ghost story whispered in secret by an older cousin. Then there are the things only they will understand like a fear of the toilet flushing or their sister’s cello case. Want to put all those fears at ease on Halloween night? We may just have the perfect costume for you!Details & DesignThis adorable Cowardly Lion Costume from The Wizard of Oz is a great choice for your Halloween festivities! It’s Made By Us which means it was designed by our in-house creative team and peppered with all sorts of details that will make this a favorite play-time costume long after your Halloween candy is gone! The velvety jumpsuit has a tufted tail at the back and a shaggy mane that falls over the shoulders and is sewn into a hood. Your kiddo will love having lion ears and big cat paws that can fold over their human hands. Topped off with a badge of courage, this costume will have your kiddo feeling brave in no time!Off to See the Costume WizardWe can’t stop everything that scares our kids from existing, their imaginations would just create a new and improved spooky villain. What can we do? Why, screw their courage to the sticking place, of course! This Cowardly Lion costume is just the thing and the best part is, it’s pinned with a medal of courage to make your kid feel like they have what it takes to stand up to whatever is scaring them! 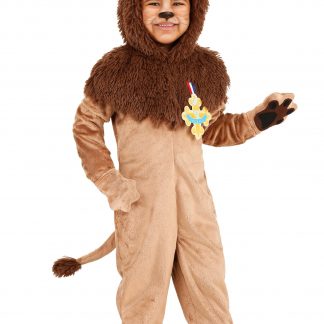