Hip hop, hippity hop hopSome animals have all the fun. Monkeys get to swing through the jungle all day. Dolphins get to be majestic, and beautiful as they jump out of the water. And pandas get to be lazy, and fed up to 40 pounds of bamboo each day.But rabbits. They seem to be the most fun. And they are definitely the coolest animals out there, with their hip hop skills. And they have the oldest claim to Hip Hop. They have an older claim then 2-Pac, or Run DMC. They have been in the Hip Hop game since they were babes. Real bunnies can spit a beat better than Eminem (and we don’t just say that because his nickname was Rabbit in 8 Mile).Now you can be the master of Hip Hop with this Adult White Bunny Costume. You will be the coolest animal in the wild when you start spitting insane new beats. The pandas won’t know what to do with your skills as a beat master. And dolphins might have a pretty high intelligence, but they can’t speak…so, they are less cool than you the rapping bunny. The monkeys will probably see you as an awesome new leader to follow. And Eminem will wish he had the ability to spit such mad rhymes like you do when you put on this white jumpsuit. *Warning: mittens might cause unintended mic drops. (Just pretend it was on purpose.)* 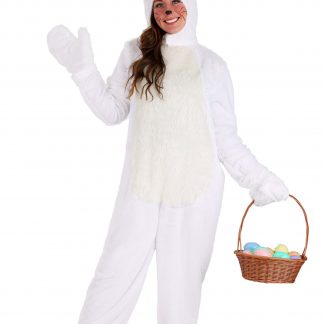