Sorcery at it’s darkest…You have heard of Voodoo dolls right? They’re creepy little dolls constructed from rags and yarn and used to inflict physical harm on the intended victim. You stick them chock-full of sharp pins with hopes that your enemy feels pain in those areas of their body. Yeah, that may seem brutal but that’s just child play compared to the physical suffering strategies implemented by this Voodoo witch. Allow us to warn you, she does not play around!Instead of Voodoo dolls, this seasoned mystical witch knows how to attack her victims in the most personal of ways. She is powerful enough to perform rituals using bones and potions to conjure up her adversaries worst fears and greatest nightmares. The Voodoo witch has the ability to torture you until you crack. She’s a queen when it comes to her craft and doesn’t need to play with any dollies to wreak havoc! If you are looking for a costume that will really terrify the masses then this Voodoo witch women’s costume is exactly what you need. The tribal print dress features a tattered bottom. The matching headband has a skull decal and attached feathers, while the flattering belt and scarf ties the whole look together. A small satchel hangs from the belt which is perfect to use for toting around potion ingredients. Once you’re dressed, start casually muttering some incantations to really make people believe you’re about to create some chaos! 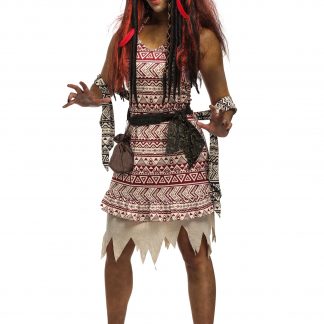