Spelling BeeEvery year witches get together for a spelling bee. It’s an offshoot of the actual spelling contest we all know from grade school except instead of reciting vocabulary these witches are whipping up magic. As you might be aware, there is a lot of competition between different sects of witches. The Druids from Scotland always think they’ll wipe the floor with the Greek oracles but the oracles tend to whip up spell out of their toga sleeve at the last minute and kick the Druids out by the semi-final. This year, however, an unexpected victor emerged. A Voodoo priest, fresh from the swamps of Louisiana, dropped in and dropped the mic with a spell that no one had seen successfully cast for two hundred years. She won gracefully. After she accepted the golden cauldron award, she served up some of her legendary gumbo. Everyone agreed this year’s bee was one of the best in the last century!Product DetailsYou’re sure to feel the magic once you put on this colorful Voodoo wig. The thick locks of hair are interwoven in a deep red, white, and green string for an imaginative boost to any Voodoolicious look. Pair it with one of our fabulous witchy looks and you’ll be ready to stir up some trouble. 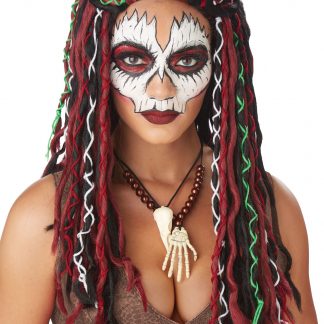