WE WANT YOU… to wear this costume!When it comes to things that represent patriotism you can look straight to the good ol’ American flag for the BEST example there is, but you probably shouldn’t WEAR the flag. Flags should always be treated with respect, and they have all kinds of rules on how to handle them. Did you know you shouldn’t even let a flag touch the ground? It’s true! So, as a runner-up for most patriotic thing in the United States that IS okay to wear, look no further than this Boys Uncle Sam Costume.Look at those red striped pants! Check out the star-spangled lapels on that jacket! That stars and stripes top hat belongs in a museum! It’s such a fun costume that is just perfect for the Fourth of July parade. Or you he could just wear it while hanging out on any day of the year. No matter what day it is, America remains amazing, so we think this costume is appropriate just about anywhere at any time, even Halloween. And don’t worry, it’s okay if this costume touches the ground or gets a little dirty. You also don’t have to worry about folding it into a triangle when you’re done.We’ve given you just a few fine reasons (and many more) to get your little Yankee Doodle Dandy this Uncle Sam costume, so now it’s time for him to show off his patriotic side and wave the Grand Ol’ Flag as this American icon! 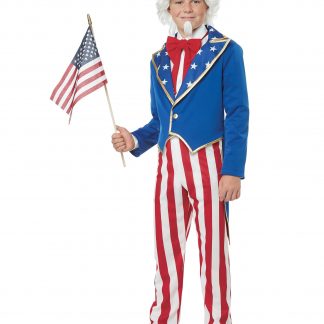