You are ribbiting!Kids are just weird, are we right? They leak all kinds of fluids. And the smells. What is with all the weird smells. You don’t remember giving them anything that would produce that kind of smell. And some of the sounds they make are really strange. It’s almost as if they are intentionally trying to freak us out.But no, look at those cute little faces. They couldn’t possibly be trying to torture us psychologically. They are so awesome. Because of them, we are allowed to play with LEGOs, and Play-Doh. We are able to play pretend again. And that’s not even mentioning the first time you show your little tike something new. It’s like you are a super magician, and you know everything.One such magic moment was when you first showed your son a frog. He was so amazed by the little slimy, jumping creature. He has been so fascinated by them that now they are all he wants. He keeps asking for all the frogs. In stores, in movies, in the wild. So, this Halloween put him in this Toddler Deluxe Frog Costume, and show him a little more magic. He will be amazed at how you transformed him into his favorite animal, so amazed in fact, that he may stop getting liquids on you. (Good luck with that though.) 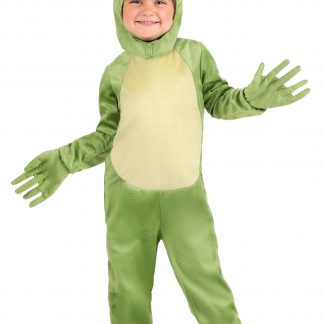