The various styles of vampires sure have changed over time! It all started out with that classic look of a cape and some slicked back hair. Before long we figured there were modern vampires out there hanging with us and becoming regular members of society who also happened to prey on the innocent in the middle of the night. We have always liked the modern ancient vampire though. They embrace the modern garb of each era, but still keep remnants of their Victorian or aristocratic past in their style as well. Take this one posing as a famous actor for example. He dresses nicely enough but with a bit of a strange set up. Just look at that hair, after all! It’s passable enough not to raise suspicion that he may be some immortal blood sucker, but long and wavy enough to match what he’s been comfortable with for the past few hundred years. One question we’ve begun to ask ourselves though is, if vampires keep growing old, do they maybe go bald eventually? We’re pretty sure they don’t but if you know a balding vampire, or if you need to disguise yourself as a vampire with sweet hair, give this wig a try. It’s to die for (Sorry about the shameless pun insert. It’s what we do.) 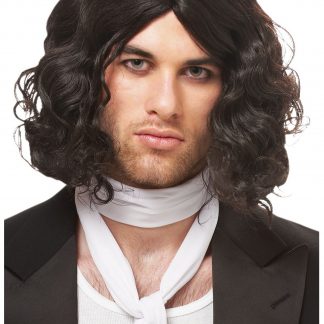