Wrestlers Gonna RumbleLovers gonna love. Players gonna play. Haters gonna hate. And wrestlers? Well, they’re gonna rumble. You can’t stop them—it’s in their DNA. If you put a whole mess of wrestlers inside of a ring together, they just have to battle it out until only one of them remains standing in the ring. Now, our expert designers have captured the chaotic nature of a WWE battle royale with this Radical Rumble WWE Sweater.Design & DetailsThis adult sweater is part of our ugly sweaters line and is officially licensed from the WWE. The design features an impressive roster—only the most well-seasoned wrestling fans will be able to name each and every wrestler on the sweater! (For the record, the complete list is as follows: Mankind, John Cena, The Rock, Andre the Giant, Macho Man, Becky Lynch, Rowdy Ronda Rousey, Ric Flair, Kane, The Ultimate Warrior, Stone Cold Steve Austin, Bret Hart, The Undertaker, Shawn Michaels, and Big E from The New Day.) The sweater has an 80s inspired neon color scheme, perfect for fans both young and old. The cozy design also helps keep you warm on those frosty fall days, so you can keep comfy while you revel in the mayhem of the battle royale! 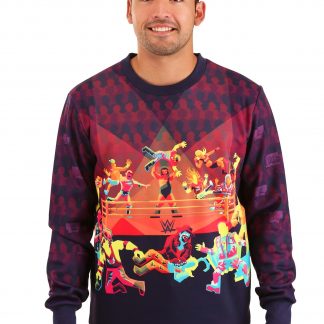