fit for a royalThe general consensus says that it’s not ladylike to exhibit rage. And maybe they’re right. There’s certainly an argument to make that it’s not. But the Queen of Hearts isn’t just a mere lady. She’s a queen. By birthright, queens are allowed to have a healthy reserve of rage. The land is in their hands, after all. If a monarch doesn’t inspire fear, those cards will run rampant, painting roses red and stealing all the silk and tarts from the aristocratic supply. That’s just not acceptable. The Red Queen’s punishments might have gotten out of hand every once in a while, sure, but we like her style. Maybe what she needs to temper down all that rage is to have a good old fashioned party — no croquette, cards, or tarts involved!product detailsWe know that if the Queen of Hearts is to rule, the chances of her being fair and just are at their highest if your little one takes the crown. This all-polyester Toddler Queen of Hearts costume is comprised of a pullover dress with a foam-backed stand-up collar, which inspires allegiance among the room’s ranks. The sleeves have satin puffs at the shoulders, while the hair ornament is a metallic knit crown with a satin bow attached to a plastic crown. The people here believe in your little one! We hope you instilled in her a good sense of right and wrong (for our sake). 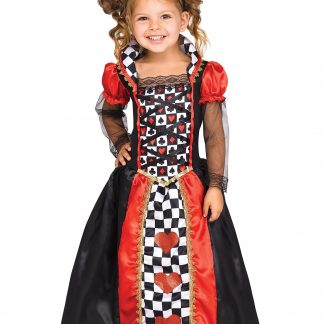