Zombie-Ninja-Comedian What is going on with Deadpool? He’s got a face that only a mother could love. He could roundhouse his way through about a million bad guys. He also sounds a little like he’s doing a stand-up routine when he’s doing his whole crime-fighting thing. He’s what would happen if a zombie, a ninja, and a stand-up comedian had a baby. Actually, now that we think about it… that’s pretty awesome!He’s definitely not your typical superhero. Well, he’s not your typical anything, really! Why, then, would he settle for a typical sort of costume? He doesn’t! Since his mutant power lets him take a pretty good beating before going down for the count, he doesn’t want his opponents seeing him bleed. The black portions of his costume are just to help him look tough. This premium Deadpool costume captures both of those aspects in style!Product DetailsThis officially licensed Deadpool costume comes with everything you need (aside from mutant powers) to become the Merc with a Mouth. The jumpsuit is bright red, which Deadpool uses to hide his wounds during a battle, but you can use to stand out at any convention or costume party. The black accents along the sides accurately recreate his look from the X-Force comic books. The gauntlets have black faux leather accents and the matching boot tops fit perfectly with any pair of black boot covers you might have. The belt even includes Deadpool’s symbol on the front. This costume also comes with 2 masks. One, which is Deadpool’s standard red and black mask, and the second mask, which recreates Deadpool’s scarred face. You can wear either one to feel like the deadly Marvel mutant.Conventions or Costume PartiesSo, whether you plan on running your mouth at the next convention, or you want to be the best ninja-zombie-comedian that you can be, this Deadpool costume is perfect for you! Just make sure to pair it up with a few of our ninja weapons to be ready for anything! 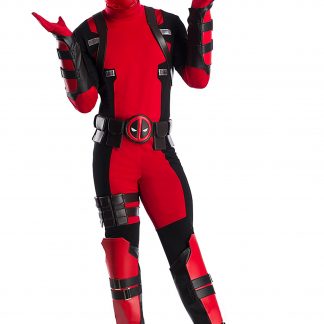