You’re Not ReadyHey, look here, guy. You can’t just go waltzing over to Darth Vader’s pad to challenge him to a lightsaber duel. You can’t expect to defeat him without the proper training. And exactly how many Jedi Knight lessons did Obi-Wan Kenobi give you in the last Star Wars movie? Like 3? Maybe 3 and a half? No, no, no. You’re going to fight him and you’re going to lose. You’ll probably end up frozen in a block of carbonite. Vader may even succeed in defeating the Rebel Alliance afterward and then where does that leave the rest of the galaxy? Doomed. That’s where!Here’s what you’re going to do. You’re going to hop into your X-Wing. You’re going to chart a course for a backwoods planet on the Dagobah system. You’re going to splash around in the swamp until you bump into Yoda, the Jedi Master. He’s going to teach you how to be an elite warrior, so you can show that bully, Darth Vader, a taste of his own medicine. But first, you’re going to pack this Premium Dagobah Luke Skywalker costume with you, because that’s what you wear when you’re doing Jedi training with Yoda!Product DetailsThis officially licensed costume brings you Luke Skywalker’s look from Star Wars: The Empire Strikes Back. The costume comes with a tan jumpsuit that strives to recreate the look of the outfit that he wears during his training on Dagobah. It has plenty of pockets in the chest, along the arms, and in the pants. It also comes with a pair of light brown boot covers which are designed to look like the footwear worn by Luke. They can be worn over most pairs of shoes. Finally, the molded belt puts the finishing touch on the look, ensuring that you look ready to learn a few lightsaber moves.Train, You MustBe sure to take our advice! You don’t want to face off against Vader until you’ve done the proper training on Dagobah. That starts with you wearing this Luke Skywalker costume, which will have you looking like the galaxy’s finest Jedi Master in training! (It will also help keep you from ending up in a brick of carbonite.) 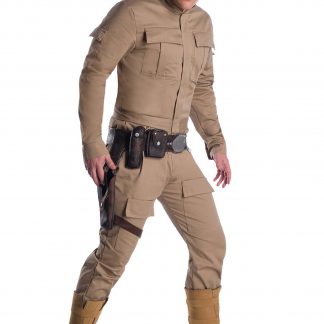