We’re calling it: in a thousand years, archaeologists are probably going to think that Marilyn was the name of every blonde female starlet from the 1950s and 60s. Along those lines, they’ll probably think that every Marilyn always wore a white halter dress like this, with a gravity-defying skirt. And in a way, they’ll be right.Because certain images are bigger than a particular actress, a particular film, or a particular moment in time. For instance, the scene that inspired this classic costume has already been made into postage stamps and supersized works of sculpture. It’s been referenced and parodied to the point that it’s practically its own thing! All across the globe, whenever anybody sees a tasteful white dress attempting to lift itself away from the shapely figure of an attractive blonde lady, they hear a little ding of recognition in their brain—even if they can’t remember the name of the movie it’s from. That’s what makes this little number such an applause-worthy choice for a star-powered Halloween costume! 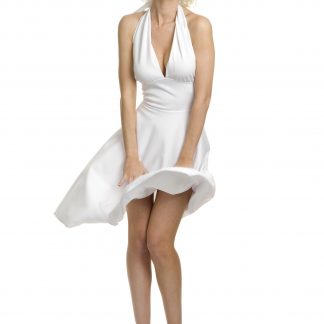