What’s the Magic Word?Nerdy Dennis Nedry gets a bit of a bad rap. Sure, he was lazy and arrogant and had a really, really messy desk. Sure, he was willing to steal precious dino DNA and sell it to the competition so that he could make thousands of dollars. And sure, he kind of unintentionally kicked off the whole Jurassic Park disaster by shutting off the park’s power in the middle of a raging storm, resulting in several people’s violent deaths.But, that’s only because he wasn’t getting paid enough! If his job had a better salary, he’d never have felt compelled to smuggle DNA out in a shaving cream can. So really, it isn’t his fault that all those bad things happened! It’s his greedy boss’s fault!Product DetailsOkay, maybe Dennis Nedry is responsible for all the prehistoric chaos bursting out of the 1993 blockbuster. But that didn’t stop him from being a fan favorite, and now you can bring that sense of geeky fun to your next costume party with this Plus Size Jurassic Park Dennis Nedry Costume. The costume comes with Dennis’s signature yellow raincoat, hood, tropical-print shirt, black glasses frames and, of course, Jurassic Park employee badge. All you need is a can of shaving cream to complete the look! (Well, that and some pants, since the costume doesn’t come with those. We highly recommend putting on pants before heading out to your costume party!)Watch out for Dinos!While we can’t excuse Dennis’ way of making a little extra money on the job, we can wholeheartedly endorse his unique sense of style, and we wholeheartedly cheer your decision to dress like him for your next costume party. But a word of caution: Watch out for any dinosaurs when you get into your car! 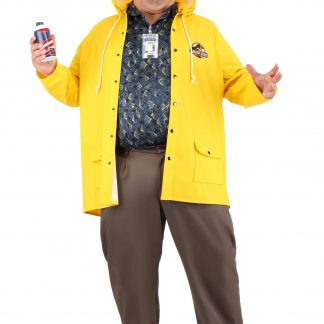