A Pirates Life for Me!Life on the high seas was far from easy for pirates. It was either feast or famine. Literally. Sailors were either stuffing themselves with roasted pigs between Caribean islands or they were nibbling on dry hardtack, a biscuit made specifically for hard times at sea. The same went for everything else from water to gold. The closest thing the sailors had to a 401K plan was a map with an X that marked the spot. So it makes sense that those self-same pirates would want to tote what they’ve been through by tatting up their skin!Product DetailsYou don’t have to go under the needle to gain the tough look of a weather-worn pirate. You’ll have all the classic designs when you slide on this sleeve. It includes an anchor, a treasure chest, a ship, and a pirate maiden, of course. Inky IntentionsEvery tattoo that pirates typically got had a specific meaning. An anchor meant a sailor had crossed the Atlantic. A nautical star was meant to guide the mariner home. The rest of these tattoos meanings are up to your very own interpretations. Create your own pirate tale when you slip on this gritty tattoo sleeve! 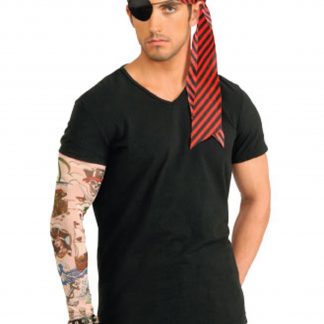