A pirate’s best way to show off wealth was surprisingly not their bank account. As it turns out, they didn’t have credit cards all the way back in the 1700s. How did they prove that they were the best pirates out there? Well many of them liked to have a big old storage room of gold, but that was usually in some secret hideout on their own private island. Not even most of their own crew got to see where that stash was (turns out pirates aren’t very honest). In order to show the general populace that they had money to spare, many swashbucklers would wear tons of jewelry worth a bunch of money! We do not actually sell the real deal. We’re more into the kind that looks luxurious enough to trick people into thinking you’re a successful pirate, without draining your coin purse of doubloons. This multi-strand necklace is perfect for that because it has a ton of different strands from gold chains, to red beads, to pearls, and even a jolly roger pendant. It’s going to demand respect from fellow buccaneers and complete your costume. 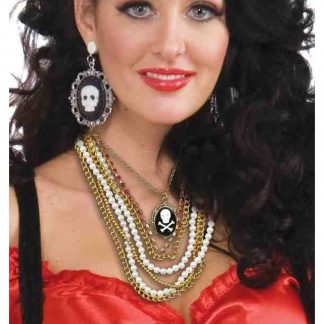