A Man of the PeopleAre you a man of honor? A man of compassion? A man who’d be willing to do anything for a group orphans? Nacho Libre is. He wouldn’t think twice to don a full luchador outfit just to raise some money for the kids. It doesn’t matter that he isn’t necessarily what you might call the standard wrestler physique. It doesn’t matter that goes against the rules of the monastery! A man must do what he must do!Of course, you must do what you must do as well. That means you will need this Adult Nacho Libre Costume to help you pursue your dream of being the greatest luchador that the world has ever known. It’s an officially licensed, Made by Us design, which will have you ready to go toe to toe with any foe.Design & DetailsIt is not easy to enter the ranks of the Lucha Libre wrestling leagues in Mexico. Ignacio finds this out the hard way in Nacho Libre. He’ll do whatever it takes to put food on the table for his orphan friends, and we suspect you would do the same. With this costume, you’ll be able to establish your place in the ring, in classic luchador style! Find yourself a partner, practice your top turnbuckle moves and we’re confident that as Nacho Libre you will make your way to the top ranks of Mexican wrestling. (Also, eating the raw egg of an eagle is never a bad idea). You will become the champion and you might just win the heart of Sister Encarnación…The Luchador MovesJust make sure you practice a few of your wrestling moves before you slip into this costume. You don’t want to end up in the ring against Ramses without a few special moves under your belt. 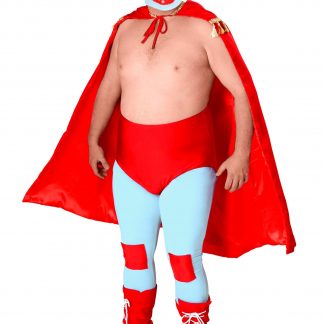