In ancient Greece a gesture was created to let people know how you really think about them but what is the story of how it came to be? Long ago there was a Greek rickshaw driver who was having a bad day. His fares were rude to him all day and he was stiffed on a tip a few too many times. Near the end of his shift of running people around on his cart he hit his wall when he was shorted in pay for a ride. In a fit of anger he shouted the worst curses in Greek he could muster and extended his middle finger out at the person. This is how this gesture was born and now you can bring it to life in this large hand costume. 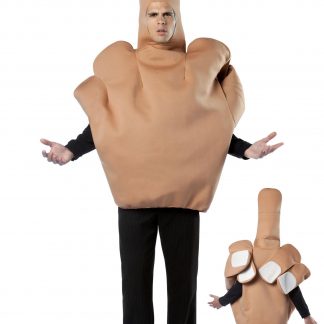