An ancient warrior’s cape was his blanket, his battle standard, and his protection from the elements. So it stands to reason that he’d want it to be the best, brightest piece of cloth he could afford. Any warrior would have been proud to wear a cape like this 100 percent polyester velvet Spartan Warrior Cape, and you won’t even have to spend a year’s coinage on it! Dye has become a little less of a luxury in the intervening millennia. This Spartan Warrior Cape fastens at the right shoulder with Hook and Loop fastener behind sewn-on gold-tone metal. Come home with your shield or on it, warrior.Spartan warriors were trained from birth in a competitive, strict system of military education that hardened men into lifelong soldiers by pitting them against each other, isolating them from their wives even in peace time, and training them to accept death before surrendering. With this Spartan Warrior Cape, you can achieve their distinctive look without any of that annoying training. You might not turn out a hardened warrior, but as long as you’re a relative hardbody (Michael Fassbender’s abs not included! You’ll have to get a Hollywood trainer and stop eating carbs if you want that), no one will be the wiser. Just don’t get into any battles to the death. A Spartan warrior may have been at their best without anything weighing them down, but you might not want to get a sword pointed in your direction almost in the nude––this cape doesn’t offer much protection. 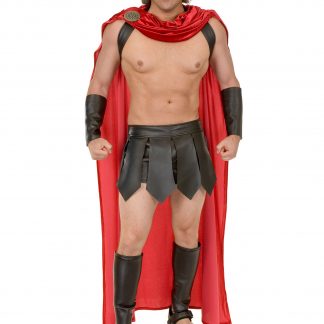