Ship Shape yet ShaggyPirates get a bad rap. They were tough and shaggy, sure but who wouldn’t be shaggy when they’re living on the wide ocean. There’s no fresh water, no tubes of toothpaste, no bars of ivory soap. And if you think there were mirrors to make it easy for the pirates to shave, you’d be wrong. But this lack of personal hygiene doesn’t mean that pirates are messy. They kept their ships as clean as can be! They swap the decks more often than most people sweep their floors. They might have been dressed in raggedy clothing on the ship but once they weighed anchor at civilization they dressed to the nines because what else are you going to do with all that loot?Product DetailsThis long, grey beard will make it look like you’ve been sailing the seas for months on end. With layers of shaggy, grey hair you might even look like you’ve been marooned on an island. This beard straps to your face with an elastic band to make sure it stays in place even while you’re climbing the crow’s nest. Now that you’ve got your beard, you just have to decide on your pirate persona. Jolly and jigging or deadly and dapper? It’s up to you! 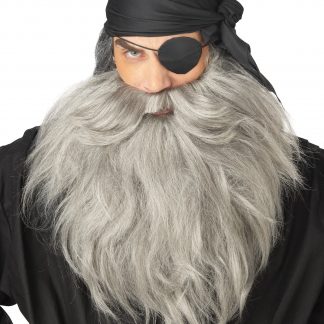