We think that everyone who dreams of becoming a pirate should get a chance to earn their salt, but the unfortunate reality is that plenty of would-be privateers are only in it for the grog! And those layabouts wouldn’t be so much of a problem if they didn’t taint the good name of buccaneers everywhere, but that’s precisely what they do. So you may want a Deluxe Black Pirate Jacket with Pockets to distance yourself from the unserious and unprofessional hooligans who slap a bandana on their forehead just to petition the captain for a share of the plunder!Let this high-quality garment imply what you’d rather not have to say out loud: for you, piracy is a calling. Why else would you be decked out in such finery? A jacket with 8 detailed skull buttons and a set of functional pockets? That’s not the kind of thing worn by a common swabbie! 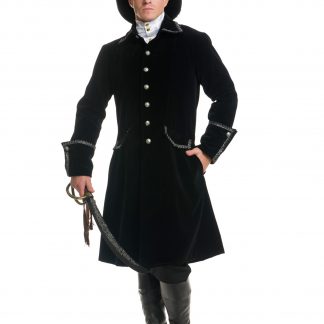