Born of the Darkness…Everyone knows that trying to fight against Batman is pretty much the worst idea. The dude has more money than Bruce Wayne—since we figure he’s got to be getting donations from some of his fans—as well as a ton of technology that keeps him well-equipped for any situation. But, if you’re forced to fight him when the lights go out as well? Yeah… you’re pretty much certain to lose that fight in a snap.But, here’s the thing. Batman, despite his name, isn’t really that good in the dark, especially if he doesn’t get any of his fancy technology to help him out. That whole echolocation thing isn’t actually a thing that Batman can do. Neither is night vision. That’s why when he’s confronted with someone that really knows the darkness, was born by it, molded by it… well, things aren’t going to go so well for the Bat! That’s right. It’s time to clap your hands for a new character of darkness, fear, strength, and a surprising level of cunning. It’s time for Bane! Product DetailsStep into the role of one of the Gotham villains that took the world by storm with this officially licensed Bane costume inspired by The Dark Knight Rises. This ensemble includes an undershirt, coat, and half mask. The shirt is printed to look like Bane’s combat vest. The coat features a high collar, faux fur lining, large pockets, and buttons to create Bane’s iconic style. The mask fits over your nose and mouth; no mysterious venom gas included, so we can neither offer you the super strength or the eternal pain. (We’ll call that a wash.)… Still Prefers a Half MaskIt really shows you that this hulk is still quite the genius in that his mask only covers half his face. Most of your typical ‘forged in darkness’ kind of villains would go for the completely blinding mask for the intimidation factor… but Bane really doesn’t need to work that hard, does he!? 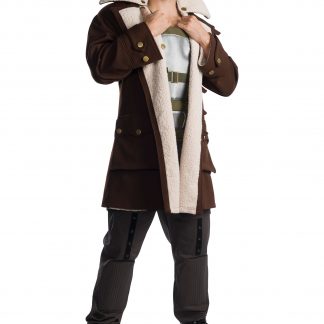