Living in a ShadowDo you ever feel like you’re living in someone’s shadow? You know, maybe you have an older sibling who gets ALL of the attention. Perhaps a co-worker at work gets all of the praise, even though you’ve come up with plenty of clever solutions during the course of your career.Well, that’s what Loki’s entire life has been like. He spends each day, hearing from his friends and family how great Thor is, despite the fact that Thor is kind of a loud-mouthed moron who’s being handed the crown of Asgard just because he’s Odin’s eldest son. It can be a bit much. That’s the whole reason he decided to command an army of alien creatures to conquer planet Earth! Now, we’re not suggesting you wage war on the entire planet… but maybe you can get into character (and show the world that you live in no one’s shadow) by dressing up in this Premium Marvel Loki Costume for men. It’s officially licensed and captures his iconic armor from Avengers and Avengers: Endgame.Product DetailsIf you’re ready to command the Chitauri Army to step out of the shadows, then you’re ready to wear this Loki Costume. If you just want to look like an awesome super villain, then this costume is also for you! This costume recreates his outfit from the films. The top has gold armor pieces that cover the chest and arms, along with a cape that fits on your shoulders. The gold boot covers fit over most pairs of shoes. Finish it all off by placing the gold horned helmet on your head! It’ll have you ready to engage in some true trickster god-style tricks! 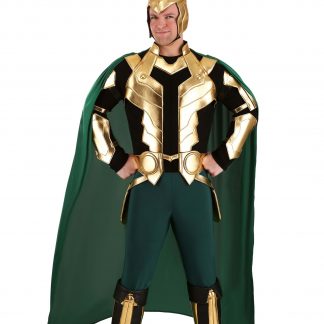