A New Legend is Rising UpLegends don’t just happen. They take years of hard work and training. Do you think that Macho Man Randy Savage just walked onto the stage to become an instant star? No! He had to pay his dues and wrestle his way to the very top. As we all know, the cream rises to the top and it didn’t take too long for him to prove himself. If your child is itching to become a real WWE star, then he’s going to have to begin his training regimen now to rise to the top!Your little one might be just a toddler, but that means he’s prime for sculpting! You can turn him into the greatest wrestler of all time by the time he grows up. That means doing plenty of jumping jacks, jogging around the house, and eating tons of vegetables. You’re going to have to teach him how to wrestle. You’re going to have to teach him some showmanship. But, most importantly, you’re going to have to teach your young wrestler in training how to wear fringe.Design & DetailsMacho Man’s impeccable style started with fringe, which is why our costume designs packed plenty of that into this toddler Macho Man costume. The jacket is bright red with yellow leopard print sections. The sleeves feature that stylish fringe in yellow and black strips. The matching shirt fits underneath the jacket and the matching pants help put this costume over the top. The finishing piece to this outfit comes in the form of the cowboy hat, which is red with a leopard print band. When your child has the entire ensemble on, he’ll be ready to start his training!Because He’s WildThis Macho Man Randy Savage costume will give your child the iconic look, so all you need to do is train him in the ways of wrestling. Make sure to start with Macho Man’s favorite phrases, like “Oh yeah!” and “Because I’m wild!” 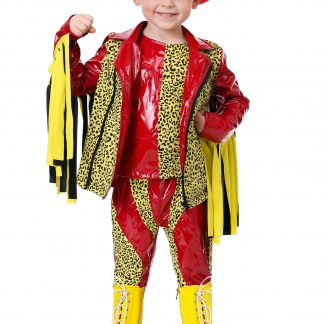