Legends speak of the two mighty ninja clans that battle in secret throughout our world. The Legion of the Dragon, stealthy and fast with feats of dexterity that cannot be denied, working towards uncovering ancient relics for mysterious and dangerous reasons. They are contested only by the Ninja Avengers, equally talented masters of kung fu and weaponry, all while maintaining a fashion sense that that is equal part efficiency and avant-garde.You’re probably asking how a war of ninjas can be going on immediately under your noses without your ever having noticed. How could they be fighting for dominance and remain so invisible? Well, it’s helpful that their trained stealth is aided by their unusual height! Indeed, epic tales are told about the legion of mini ninjas. They are thought adorable, called cute, and, worst of all, underestimated. Their candy-gathering prowess is not to be denied and, even after their successful missions have reached their end, noble Ninja Parents must keep a watchful eye lest this team sneak their own winnings up to their private bedroom lairs to snack upon their joyous rewards.And it is time that your own tyke be raised up into the order with this Child Ninja Avengers Series II Green costume. These matching green polyester shirt and pants have polyfoam printing details offering your new ninja a rising station in the Ninja Avengers clan. A crisp black belt matches the designs and marks your mini-ninja as a force to be reckoned with. But, just to ensure all anonymity, be sure to pull over the matching green hood, featuring the bright silver icon of the guild above the slit that will reveal only your kiddo’s eyes as the candy hunt begins. While your tyke’s skills are certainly enough, you might consider bolstering your ninja’s chances on the fierce streets with a collection of foam or plastic weaponry, the true mainstay of any ninja of merit! 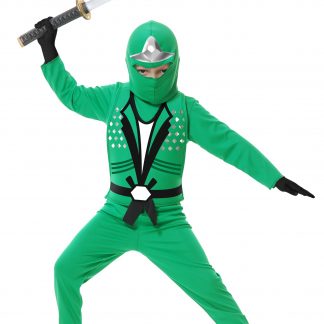