Snacky Snack on AttackFred was in a good mood. He came home from school, hung his bookbag on the back of a kitchen chair, and yelled out a hello. It had been a good day. He got an A on a math test, he told a great joke over lunch, and he was pretty sure the essay he turned in for English was a real winner. Fred didn’t know what was coming. When he went to the cupboard to grab his customary handful of after-school cheese balls, he found an empty jug with one measly ball rolling around the bottom. Someone had been attacking his snacks while he was working hard at school and Fred wasn’t going to stand for it!Product DetailsYour savory snack loving kiddo can stage a snack attack protest when you invest in this cheese puff costume. The perfect costume for kids who love the buttery cheddar flavor and fluffy texture of a cheese puff. It’s easy to slip into this ensemble. Simply throw this tunic over your child’s head over their own clothes and they’ll be ready to go. The photo-realistic image of the cheddar snack is printed under high gloss so it’ll look just like your child is a walking, talking jug of Cheese Balls.Flavorful FestivitiesCelebrating Halloween doesn’t have to be scary, it’s all about having fun! And when your child is dressing up as everyone’s cheesy guilty pleasure, they can use this costume more than once. A hilarious look for parades or themed parties, this Cheese Ball costume will be a hilarious favorite time and time again! Pair this costume with other party foods for a hilarious family look. From cupcakes to Swedish Fish, everyone can find their preferred munchable disguise. Just be sure and feed the kids dinner beforehand or they’re sure to ruin their appetites! 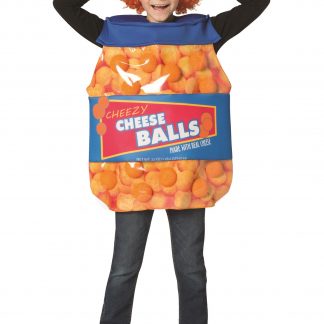