The fiercest creature of the jungle has always been the mighty tiger. Some people talk about lions being the king of the same place but we think that’s a pretty silly saying. First of all, lions live in the savannah, and probably wouldn’t know what a jungle looked like if it framed them for killing their father and banished them from their own land. Second of all, tigers average at about 850 pounds a cat(that’s about 100 of your little house kittens) while the lion only tops out at around 420 (almost 50 house kitties). You do the math right there. Who’s going to beat the snot out of who? So when you’re considering what costume to dress up as for Halloween, just remember what awesome stuff the tiger has to offer. You want to be fierce? Tigers are the biggest, baddest cats in the world. You want to be super sexy? You can’t beat tiger print. You want to still have an adorable kitty nose? Try on this jungle tiger nose, and you’ll be ready for the party. 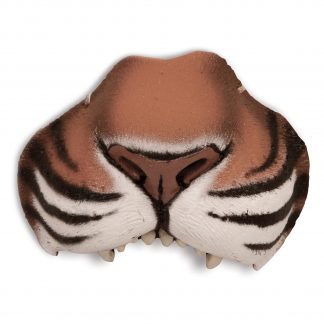