Scaring is CaringYour horror-obsessed little one is impossible to scare! They love haunted houses, late night strolls through eerie graveyards, hunting for ghosts, and scary movies—the spookier, the better.Your little ghoul doesn’t just want to give their pals a scare this Halloween…they want to give ’em the scare of their lives! And they’ve tried on a LOT of costumes to find the most fear-inducing. You’d call the kids to dinner and BAM! there was a werewolf eating your meatloaf. Or you’d get in the car to head to the grocery store, adjust your rearview mirror, and EEK! a deranged clown was strapped into the backseat. There were some good scares, but nothing prepared you for when you came home from work to find this Inflatable Grim Reaper Pick Me Up Kid Costume haunting your front steps. You aged five years just from that encounter! And that’s just the kind of scary effect your little fright-monster is after this Halloween.Product DetailsThis costume is as clever as it terrifying! It appears to be the Grim Reaper carrying around your child’s lifeless body (shudder) when in fact, your kid will be walking around with their own legs under the Reaper’s black robes. It inflates to give bulk and a realistic look to the Reaper’s face, as well as the blue top, gray pants, and “shoes” of the child’s body, from within which your kiddo’s head will emerge. It’s a terrific, terrifying ride to see this costume stride down the hall. It’s bound to be a hit with horror-lovers everywhere!Grim OutlookIt doesn’t look good for this little one, it appears the cold hand of death has carried them off into…wait…it appears the child in this costume is easily roused by the scents of chocolate, nougat, caramel, and candy corn. We bet the Grim Reaper wishes he knew how powerful a life-giving elixir candy can be! 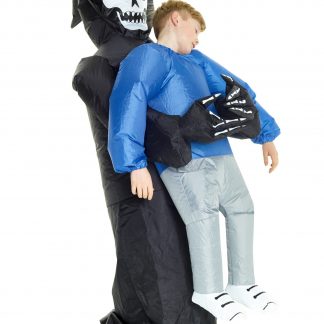