Your kiddo is already a pretty sneaky little dude, there’s no doubt about that. So, why not promote him from an expert sneaker to a master in stealth and much more this Halloween? Check out this awesome Green Ninja Costume for children! Once he tosses on this daring disguise, he’ll be well on his way to being a legend.Your little one will be absolutely ecstatic when you show him this amazing ninja costume. Finally give your youngster the opportunity to live out his dream of being one of the most feared and respected warriors in the history of the world. He’ll feel ready to run atop the tree lines and pop out of bushes! And with this green guise, he’ll blend right in with his background and have the element of surprise over his foes with no problem at all. This butt-kicking outfit has a ferocious golden lion emblem printed on it so everyone will know that your kiddo is as powerful as the king of the jungle!No one will even think of going up against a warrior with such fierce garbs. Also, as an added bonus, his identity will be kept safe as well thanks to a handy balaclava-style hood. Once you grab him some awesome ninja weaponry, there will be nothing in his way from becoming the world’s greatest ninja warrior. Now the only thing left to do is find out whether you knee-high ninja is a more of a katana or nunchaku guy! 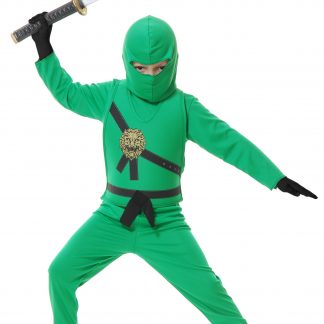