“What we do in life… echoes in eternity.”So says General Maximus at the beginning of the classic Ridley Scott film, Gladiator. While that is some expertly written and memorable dialogue, we hope it’s also a true statement. But we have no idea! What do we look like, metaphysicists?? We don’t know what happens in eternity! But if our life echoes within it, we’re glad you’re taking a look at this officially licensed General Maximus costume, because it’s epic enough to wear forever.The only thing we’d advise against is getting into any actual Roman battles wearing this thing. It’s made of latex and not metal as it appears. That being said, you could probably frighten some barbarians with it, but we don’t really recommend that either. That would require a costly trip to Germany, and also a time machine to around 180AD. That’s also where you’d have to go to get the real version of this armor. Since that technology doesn’t exist, we think our version is an amazing first realistic choice!Since this costume has incredible details and quality (How about that realistic armor and fur trimmed cape? It’s straight out of the movie!) we think you should go to a party, wait for the exact right moment, then step up into the spotlight and give an incredible, awe-inspiring speech to all your fellow party-goers. That’s what Maximus would do! You’ll be remembered in poetry and song as the greatest general Rome had ever seen… to give a rousing speech while holding a red Solo cup.”Brothers! What we drink tonight… will echo in our bodies tomorrow, and possibly eternity!”*drink responsibly 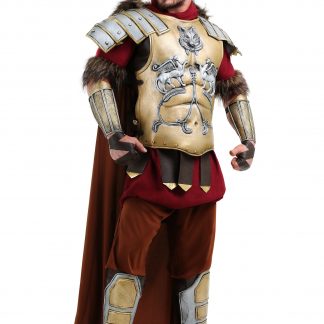