Have you ever wondered how well you would do in the dangerous drama that is the Game of Thrones? We’ve done our fair share of imagining, and while every once in a while we think about how we could pull off some sick moves in defense of our shield if we’re honest we think most our time in Westeros would be spent admiring ourselves in awesome Westerosi garb. Hey, what do you expect? We’re costume enthusiasts, after all!Anyway, while most fighters in the seven kingdoms are to be admired there are none who exude that knightly air, that royal confidence as much as Jaime Lannister. Sure, he’s been painted as a villain in the past, with even his own family getting on his case on the regular but there’s more to him than meets the eye. After all, a man that can handle a sword after having his hand replaced with a gold one has to be tougher than his golden haired looks hint at. You’ll find this light weight foam sword to your liking. Don’t be fooled by the intricately molded handle and aged Valyrian steel facade. It might look heavy but It’s comfortable enough that you can easily take on your foes one handed! 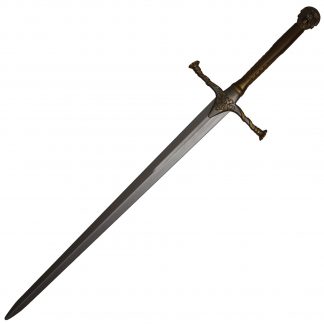