Look, not everyone is going to belong to the same Angel party. We get it! Sometimes there’s a bunch of political differences and ideologies that you just can’t get past. Some Angels wanna stay loyal to the big guy in the sky…they dig saving kids from car wrecks, showing depressed bankers how they would have screwed up everyone’s lives if they had never showed up on earth, and occasionally appearing on TV shows in the form of an adorable Irish lady. But that’s not your bag! Nope…instead, you prefer to serve an evil master and do his bidding by striking terror into the hearts of innocents, and maybe occasionally you like to pick up a couple of strays and carry them off to the gates of hell. Tomatoe, tahmato!Instead of picking sides, we prefer to celebrate differences…which is why we’d like you to consider this Fallen Angel Mask and Wings as an addition to your angel wardrobe. If you’re going to set yourself apart from those sissy golden do-gooder angels, why not do it with a horrifying latex skull mask and shadowy wings that extend with the pull of a string? One look at your horrifying appearance and those mewling humans will finally know that you’re not the kind of angels who give welfare to their souls, but will force them the fight for it themselves! (I mean, it’s for the best, really…after all, how will they ever know the satisfaction of being able to live if they don’t work for it?!) 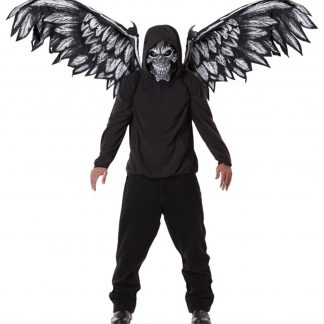