The Line Between Good and EvilSome might call him a villain, but we understand him. Despite his cool exterior, Severus Snape had a raging war inside of him. A battle between his desire for power and his will to embody the virtues that he saw in Lily Potter, his one true love. He walked the tightrope between good and evil, constantly testing his moral boundaries in order to keep Lord Voldemort from consuming the entire wizarding world. He put his life on the line to undermine the most dangerous sorcerer that the wizarding world has ever seen. He embraced his better nature, while simultaneously hiding it as he played the double agent like a true master of espionage. He shouldered a burden that no other wizard could take.If they want to label him a villain, so be it, but without him… Harry Potter and The Order of the Phoenix may not have had the time needed to lay down the groundwork for the final battle against the Dark Lord. If you want to step into the role of the most complex character in the Harry Potter series, then look no further than this Deluxe Harry Potter Snape Costume.Design & DetailsThis officially licensed Harry Potter costume brings you the plus size version of our Severus Snape costume. The costume starts with a frock-coat jacket that fits with covered buttons in the front. The shirt front fits underneath the coat for a full and complete look. The black robe fits on top and even features a small pocket in the sleeve for a wand, so you can keep your wand at the ready! When you have it on, you’ll be ready to stand between Voldemort and the destruction of Hogwarts!Ready Your WandIf you respect the iconic character, then we think you’re ready to roleplay as the one and only Professor Snape. Make sure you add a wand to your order, since you’ll need one if you want to join the ranks of the Death Eaters! 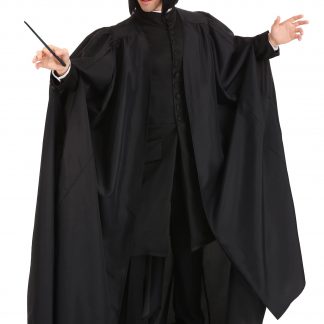