Being dreadful is one thing, but being delightfully dreadful, well, that’s another thing all together. It’s something that those low-class zombies will just never get and it’s something werewolves are just to wild to understand. Of course, being a vampire, you should understand the balance of elegance and terrifying nocturnal activity that it requires to be a dreadful, but delightfully so. The first step (aside from being afflicted with the curse of vampirism), is to wear the right outfit, that both exudes regal status AND makes mortals just a little bit more afraid of you.Introducing this Delightfully Dreadful Vampiress costume, designed for female vampires with a taste for dread and maybe blood. The costume infuses your style with vampirism using a blood-red color jacket that buttons in the front. A black lace dickey helps push the dark look and it even comes with an attached collar, since no vampire would dare walk into the moonlight without a high collar (just ask Dracula about that one). Put the finishing touch on the ensemble, to turn you into something straight from a Gothic horror novel from the 19th century. Of course, we have to say, we don’t actually advocate the drinking of any blood, no matter how much your vampiric desires take hold of you while wearing this costume. Instead, we recommend just taking a few sips of a nice Merlot. (It tastes way better and you won’t have to hurt anyone at the party). 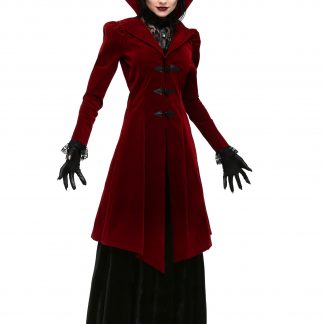