We live in a world that is pretty preoccupied by the fear of death. And, we can’t blame anyway. We do live in the world and that whole death thing seems to be a pretty solid stop to that entire notion. It’s freaky! But, it isn’t just because of the unknown. It’s also the stuff that is known. Or, at least speculated upon. Nobody knows what death really looks like, so none of us are quite sure what to expect. All we know is that it’s gonna show up with a massive and terrifying scythe, right?Well, there is that! Just watch out for scythes and we have an instant ticket to immortality! Done! … Unless, of course, your Death is pretty clever and equips a few different kinds of weapons. And, no doubt, we have encountered a few that seem to be just that smart. One, for example, especially enjoys wielding this terrifying looking Death’s Dagger. While this one is made of plastic, it isn’t the sharpness that would kill. It is the appearance! This weathered looking blade and black handle looks to have seen some truly fearsome days and is ready to claim any life that even looks at the thing, much less finds it brushing against their skin. *shudder* Watch out folks, because Death has all sorts of unexpected tools at its disposal! 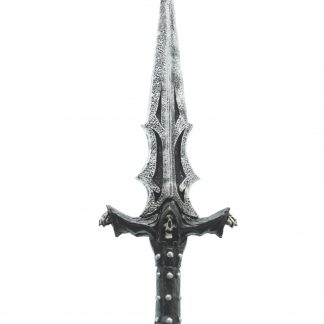