Call the Neighbors OverIf you’ve ever been to the Midwest, you know that there are some essentials to having a backyard party in the summer. First, you need a grill, and lots of meats (and maybe some veggies) to grill on it. Next, there needs to be two coolers—one for beer, and the other for water and soda. Finally, you’ll need to set up some games to keep the kids occupied while the adults chat. That doesn’t mean the adults won’t play, though, because who can resist a game of cornhole? Also known as bean bag toss or just “bags,” this game is all about putting the bag in the hole to score points. Your child will have a blast in this interactive Kids Cornhole Costume!Product DetailsTake the game with you to your next costume party or trick or treating event! This tunic-style costume is designed to look like the Cornhole board. The blue, red, and white design feels very American, fitting for a game that is so popular in the States. There are holes for the arms and head—and there is also a hole in the chest. Why, you might ask? Because this costume is a usable Cornhole board! The hole is actually a pocket, and the tunic comes with three bean bags. Your child and their friends can then play Cornhole wherever they are. If you’re lucky, they might let you play, too!Hole in OneThis costume will be a slam dunk for your child this year. But you know what would make it even better? If there was another board! This is the perfect costume for two kids who want to dress up together. That way, they can both play the game, whether or not others want to play as well. Get tossing! 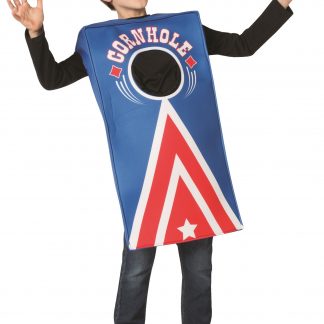