Every year your son tries to think of the scariest thing to be for Halloween. He has been a ghost. A sheet thrown over his head with eye holes cut out. Then he was the Grim Reaper. Wearing a black robe with a sickle in hand. But now he wants to go even further. He wants to be the scariest.You wish he just wanted to be Iron Man like all the other little boys. But no, he likes to give people a good scare. Just like that time he put fake spiders in his older sister’s bed. You can still hear that shriek echoing in your ears. It was so loud. After that, you told him he could be spooky, but only on Halloween. He seems to have take you at your word.He will be impressed with his costume this Halloween. This Child’s Spooky Ghost Costume is the perfect combination of his previous costumes. It has the spooky formless shape of a ghost. (Only a little more realistic than the Charlie Brown sheet he had a few years ago.) And it covers his face, so no one will know who is under the mask of a would be Grim Reaper. Don’t forget to get a Light Up Skull Lantern to really finish off the spooky look. Just don’t let him get a hold of any more fake spiders. You really don’t need to hear your daughter scream like that ever again. 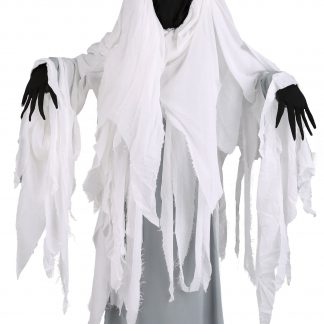