Keepin’ it KeystoneThey’re probably too young to remember the Keystone Cops. Even as an adult, you’re probably too young to remember them! To be honest, we don’t really know who they are either! But we hear that the Keystone Cops were all the rage when the silver screen was brand spanking new technology back around 1917. A long time ago!Nowadays, with video games and smartphones, silent movies seem kind of quaint. But you know what, those old silent movies are still hilarious, and the antics still stand today. Why don’t we use that fast forward effect these days, it still works! There’s no reason your kiddo can’t emulate these historical cops, just let them review those old school Youtube clips beforehand.Product DetailsSo, give your child an instant film education with this early 20th-century police uniform! And if you get a pie in the face later, consider giving them an A+! This costume is slick with a navy blue design. It’s super professional with a belted waist and a collared shirt attached to the long jacket. The jacket looks like it’s straight from an old-fashioned photo with flaps on the shoulders and hook and eye strips under the silver buttons on the faux chest pockets and down the middle. The belt secures by hook and eye strip in the back. The pants are comfortable with room to rock those crazy antics because of the elastic band. The helmet is a hard plastic with a shield on the front that matches a badge on the arm.Old-Timey AnticsHey, it’s time the Keystone cops had their time in the sun once again! Introduce a new generation to the hilarity with this authentic-looking Keystone Cops costume! Hey, it’s never too late to discover the classic, and a costume is a great way to do that. 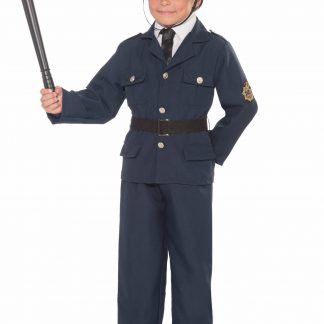