Remember when the world wasn’t quite so patriarchal? There was a time when women had just as much of an opportunity to command the world as the men did. We were all on equal footing. We all put food on the table. We all cooked it. We all did our equal part and got our equal reward. And, if we didn’t? Well, we got kicked right out of the cave and had to survive the horrific night on our own, hiding from saber-tooth tigers and the other warring tribes of Homo Habilis.Well, yes, that equality didn’t last much longer than the ancient BC period. After that, we had a few people stand up and claim that since some of the guys could lift more, clearly they were the natural leaders and that meant the ladies needed to stay in the back of the cave, skinning the super mammals and rending the meat until it was chewable. But, it didn’t need to go that way. The ladies could have just as easily claimed the prize at the top of the hill.So, let’s go back to that time and make a few changes to set things right! You can do so with this Cavewoman costume. This zipper-down dress has brown faux fur on the front and leopard print on the back to remind your fellow hunters precisely who did both the killing of the animal and the killing on the fashion floor. The belt and gauntlets tie with leather straps. All you need now is a good solid club to whack any stupid ideas of male supremacy right back to the stone ages. 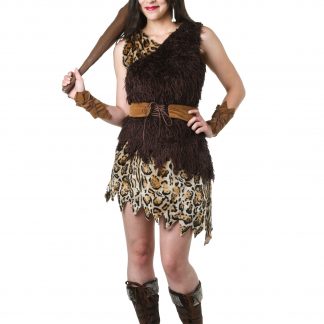