Have you ever wondered why public buildings don’t specify what is coming out of their drinking fountains? Anything liquid could be coming out of those spouts and if it’s clarified beet juice we don’t want anything to do with it. The thing about stating the obvious is that sometimes it just needs to happen. That’s why we love the captain.Take that infamous incident on the Titanic for instance, no not Rose’s scandalous love triangle, that’s fiction. We’re talking about the real life accident! It should have been obvious that there was an iceberg ahead and maybe it was. If Captain Obvious had been there doing what he does best, then maybe that ship would have remained afloat. While we would miss weeping every time we heard the opening lines to Celine Dion’s classic ballad it would have been nice to prevent that epic tragedy. So, whether the issue is small, like stating that the coffee in your to go cup is hot, or large like announcing a humongous iceberg is looming up ahead, sometimes stating the obvious is what needs to happen.You can be the one at the helm, making those important announcements at your next costumed affair. This red jacket with official-looking cording and medals will give you the authority to state with confidence that someone is dressed as a cat or another person has fallen down when they trip on the door jamb, because who knows when the so-called obvious facts just might save the day! 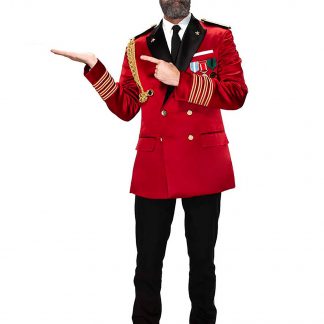