When you began dabbling in Voodoo you didn’t realize that you would get sucked so deeply into it. It started when you were in New Orleans and met a mysterious woman who introduced herself as Ms. Laveau. How were you supposed to know that this was the woman that has been talked about for hundreds of years? How were you supposed to know that you were sipping a Sazerac with the voodoo queen of New Orleans? When she began to train you in the art of Voodoo you figured you would be simply learning a couple potions or chants. You liked the idea of keeping a shrine, lighting incense, and putting out offerings but since you were learning from the legendary, immortal queen you were in for more than you bargained for. When Marie Laveau arrived at your house with a length of burlap you figured she had a crafting project in mind. When she began taking your measurements you figured that she might be making you some kind of ceremonial robes. She asked you to try it on and began to chant. You began to feel strange in the strange yet fashionable dress. Somehow you began to feel stiff, like you were stuffed with straw. When you tried to ask the Voodoo queen what she was doing you found your mouth was nothing but a stitched line. Sure, it might sound like a sad story but look at it this way, you’re one of the only human Voodoo dolls in the world and you’re made by the most powerful immortal Voodoo queen in the world. Your dress is actually quite cute with pleats at the waist and button details. Well, it could be worse but when you’re transformed back to normal and get another urge to dabble in something maybe you ought to try yoga. 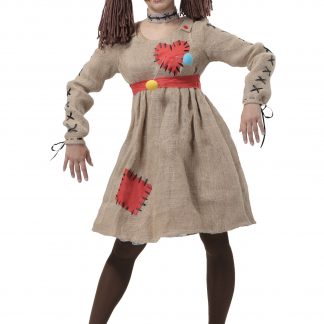