‘Ello, gov’na!Does your little guy dream of being a police officer when he grows up? Does he fantasize about saving the Queen from intruders or protecting Big Ben from nefarious plots? Maybe he just really loves those round black hats that police officers get to wear. Well, we’ve got something to tell you!First off, your guy actually wants to be a British Bobby. So if you rush out and buy him an American police officer uniform, he will be greatly disappointed. American police officers drive on the wrong side of the road, and they don’t get to use neat police whistles like their over-the-pond counterparts. And what’s even the point of being a police officer if you don’t get to use a whistle that sounds like a shrieking freight train?”Oh, no!” you might be thinking. “We live in the United States, and we only have United States police officer costumes at our local costume shop! We don’t even have any British Peeler costumes, either!”Never fear! We can help!Product DetailsGive your little crime fighter the chance to look and feel just like a real English law officer with this Kid’s British Bobby Costume. This exclusive costume comes with a jacket, pants, belt, hat and monocle (since every good British law officer has a monocle). The black jacket features silver trim and buttons, while the hard hat has a silver badge attached. The monocle can be worn on either eye, depending on how your officer is feeling that day.Fighting crimeWhether your future police chief is chasing down Jack the Ripper or saving the Queen from an assasination attempt, he’s got to do it in regular law enforcement uniform, and he’ll be sure to look the part with this costume. We wouldn’t be surprised if he got a medal of merit from the Queen herself, or maybe even knighted! 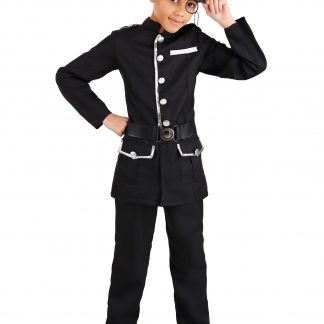