All Powerful Pharaoh Costume for Men

Why should you try to hide your greatness? The ancient Pharaohs from Egypt never tried to conceal just how awesome they were! They build giant monuments to themselves during their rule and enormous pyramids to house their bodies after death. They wore some luxurious jewelry and plenty of gold and shiny stones. Truly, they were the original ballers of the world! It’s about time that you followed the footsteps of the most lavish kings to ever rule the ancient world. It’s time for this All Powerful Pharaoh costume for men.Our costume designers pulled out all the stops on this high quality outfit! This men’s Egyptian style costume brings you the look of an ancient king, complete with a black bodysuit, belt and wrap. The pieces have shimmering gold accents to give you a regal look that will make any subject feel your awesome might. The belt even has golden hieroglyphics on it for added effect. Of course, no pharaoh costume would be complete without some great accessories, so this one comes with a cape, some gold armbands and a luxurious headpiece that looks like something that King Tut would wear. What else could a king ask for (except complete and total subservience from his servants)?So, don’t hide away! Stand tall and proudly proclaim your birthright to the throne… or at the very least have a really magnificent time dressing like an ancient king. When you wear this costume, you can choose any of the great Egyptian Pharaohs. We suggest you go as Ramesses the Great, because he’s a total boss. 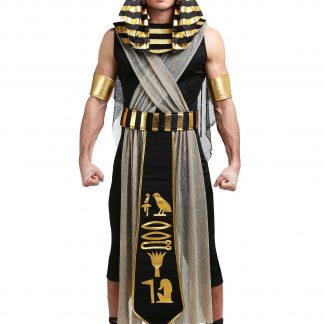 You're viewing: All Powerful Pharaoh Costume for Men $54.99
Buy Now